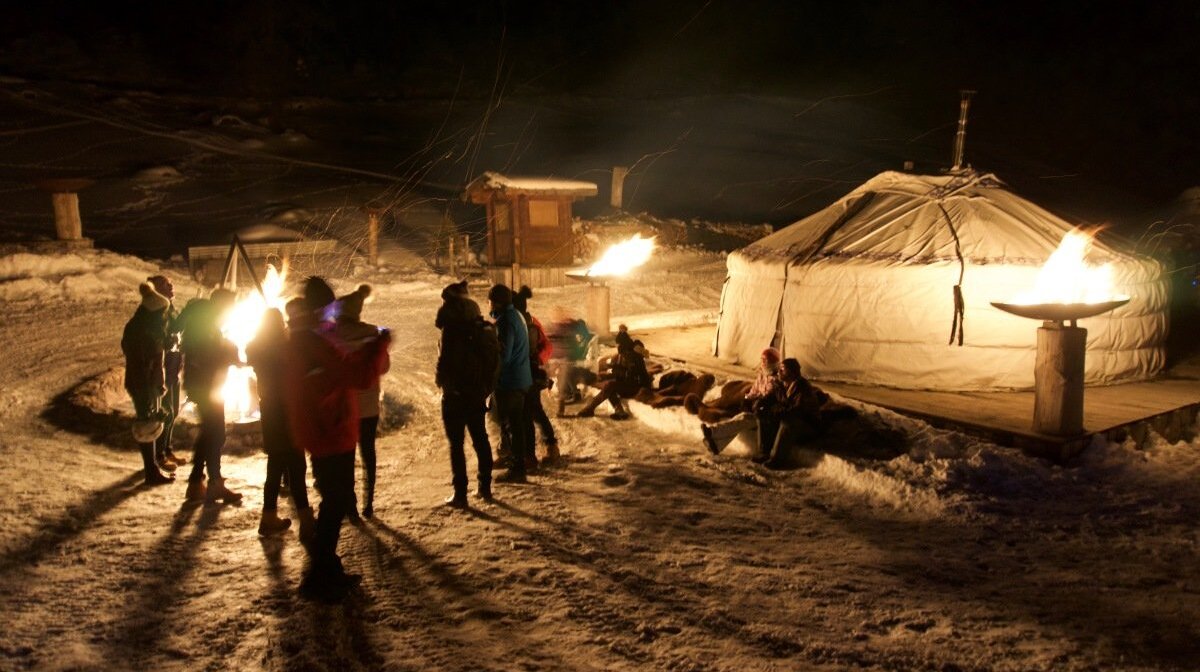 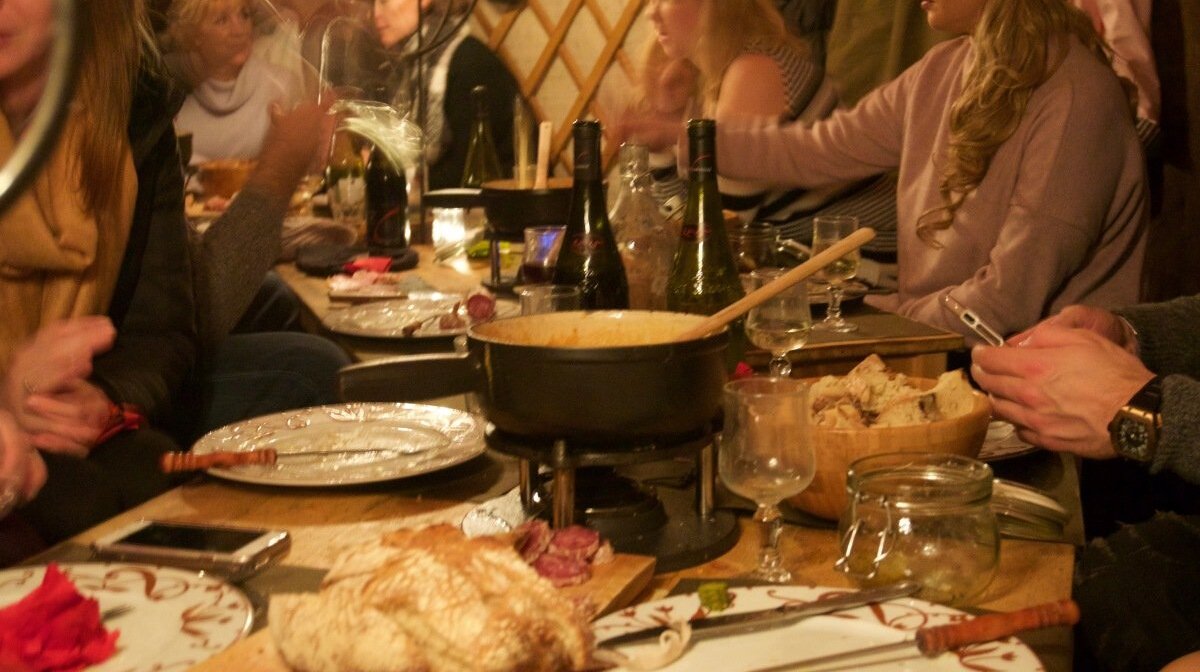 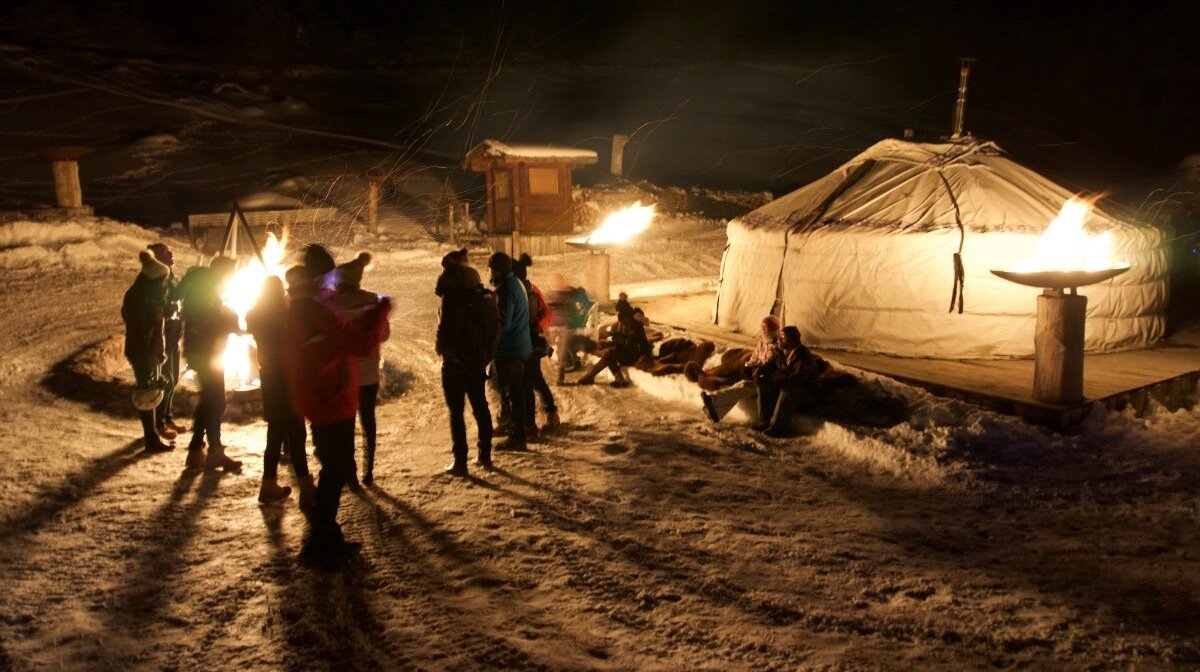 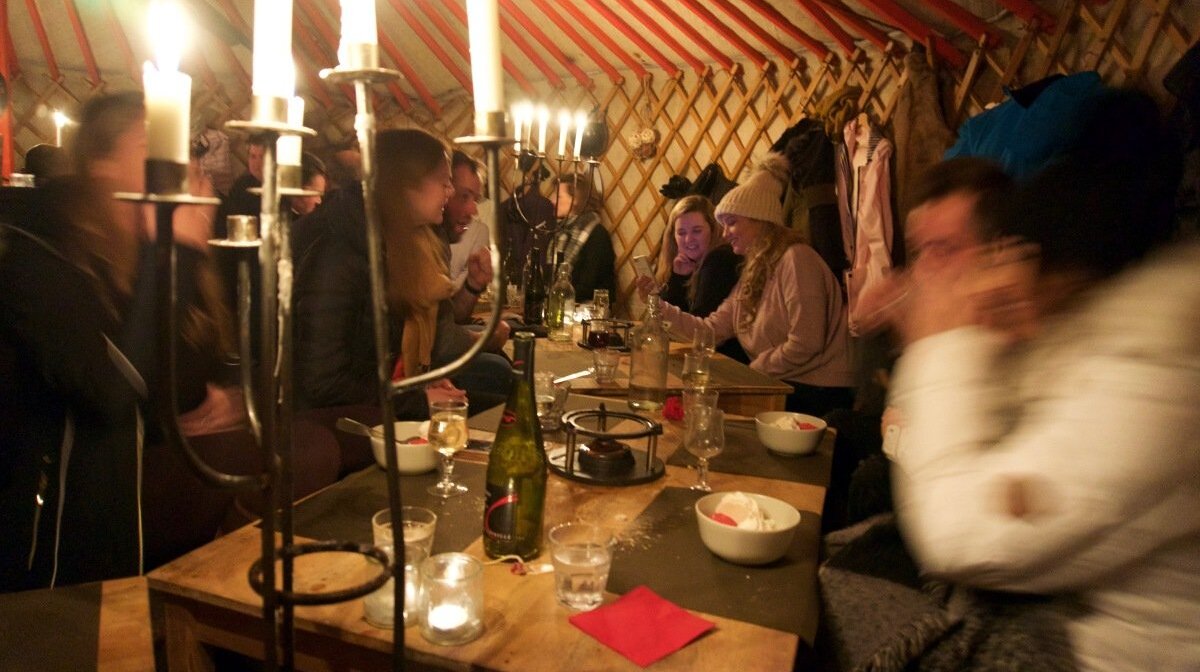 If you're looking for something a little out of the ordinary to do on an evening after skiing, Evolution 2 offer the chance to join a 'Wilderness Camp' in the forests near Tignes.

I was picked up in Val d'Isere and driven over to Tignes les Boisses where the adventure started. I wasn't sure what to expect as we arrived, in what appeared to be the middle of nowhere and were told to follow the beacons of fire up to the camp.

After a few hundred metres we arrived at a huge bonfire and a pair of large tipi tents in the woods and were supplied with a local rose wine, followed by a warming winter vegetable soup. The fire was surrounded by seats carved into the snow and covered with cow skin rugs which set a comfortable and authentic atmosphere, making the perfect setting to enjoy a pre-dinner drink while feeling the warmth of the fire.

The staff welcomed us with a short talk, explaining the plan for the evening and that all the produce, including the wine, was all fresh locally sourced. After this we were led into the tipi and took our seats around the dinner tables which were laid out in a circle around the log burner in the middle of the room. Shortly after we were seated the waiters brought out the cheese fondue and the trimmings that went with it, which included a charcuterie board, a huge basket of bread and pots of potatoes. With the bottles of red and white wine also waiting for us it really was an incredible spread and definitely didn’t disappoint when it came to taste either.

The fondue was mouth watering and intensely flavoursome. Where some fondues have a strong wine tang this locally sourced pot of melted deliciousness had purely a natural cheese taste. Accompanied with the charcuterie board, potatoes and bread it was am extremely satisfying dish, both in flavour and in volume and it left most in what could only be described as a cheese-induced coma. For pudding, we had meringue and ice cream which seemed like a slightly strange fit to finish off a traditional alpine meal experience, but after eating my bodyweight in melted cheese it was a refreshing end to the meal.

After that, the real adventure was about to begin. We wrapped up warm in every piece of ski gear we had to face the bracing cold as we mounted our sledges. Sallopettes, jackets, boots, gloves, helmets and goggles, plus a high visibility jacket were all required to tackle the descent from Tignes le Boisses down to Tignes les Brevieres.

We were escorted to the top of the blue run we were about to slide down by 2 Evolution 2 instructors, one leading the way on skis and one joining us on a sled. Spurred on by the excitement of the situation plus the added dutch courage from the wine, we were eager to get going and started the descent on a long straight section before veering off onto the windy roads of the piste down. The views off the side of the run were sensational and the lights from the instructors and the lit scene of Les Brevieres down in the valley provided a constant target for us to sled towards.

After the twists and turns of the flat road section we came to the final pitch of the journey, which was the steepest part of the run and led to a flat section where thrilling high speeds were achieved before we skidded to a stop in the centre of the valley, which marked the end of our descent.

When we got to the bottom, we were met by taxis ready and waiting to pick us up and drive us back to Val d’Isere. All the guests, including myself had a fantastic evening and I would definitely recommend this as an alternative night out. It's a really traditional alpine experience with added excitement and adventure and costs just €69 per person including transfers to and from resort. Give it a try!

Whether you're staying in Val d'Isere or Tignes you can book this experience with Evolution 2.